Jesus calls us to join Him in HIS church.
VIEWPOINT BRIEF BIBLE LINKS ... revised 12/30/2011/B>
(here’s a volume control for the music)
News of Some of Our
Missionary Friends
I recommend GOSPEL BROADCASTING MISSION and MISSION SERVICES and others. You can find recent news from overseas missionaries Reggie Thomas and his White Fields Evangelism.

On 12/30/11 I'm adding a link to a study about the reality of Adam and Eve. It's the third chapter in a book published this year of 2011. It's first paragraph reads: Evangelical Christians have generally resisted the demythologization of the events of the Gospels, whereby, for example, the resurrection of Jesus is interpreted as a mythical portrayal of the principle of new life. Indeed, they have argued strongly that it is the very historicity of the resurrection event that is so vital. However, when it comes to the biblical figures of Adam and Eve, there has been a far greater willingness to interpret them as mythical or symbolic. The simple aim of this chapter is to show, in sketch, that, far from being a peripheral matter for fussy literalists, it is biblically and theologically necessary for Christians to believe in Adam as first, a historical person who second, fathered the entire human race. Visit the site of Joseph Shulam (Jerusalem). OR of Jim & Peggy Hosken (Mexico), OR of Good News Productions, International. 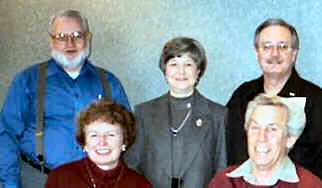 and Andrea Gentile, (Italy),
and a new combined work to reach those who speak mainly the Spanish language,
(in El Paso, TX),

In the U.S., Olan Hicks (evangelism and Divorce/Remarriage Consultations).